Zen Master Dae Gak is the Founder, Abbot and Guiding Teacher of Furnace Mountain and all its affiliate centers. He has practiced Zen for over forty years, and received Inka (permission to teach) in 1986 and final Dharma transmission as a Zen Master from the Korean Zen Master Seung Sahn in 1994. Before becoming a student of Zen Master Seung Sahn, he studied extensively with other teachers in Japanese lineages.

He founded the Lexington Zen Center in 1980 together with Mara Genthner and began building the retreat center at Furnace Mountain in 1986.

For almost 40 years, Zen Master Dae Gak has taught in America and internationally. He leads the monthly retreat program at Furnace Mountain and also travels regularly to teach students in affiliated centers across America and in Europe.

Since his recognition as a teacher Zen Master Dae Gak has directed his life toward supporting people in their efforts to realize their original nature of fearless immediacy and unbounded compassion, following the clear teaching of the Zen Ancestors and his own realization that the practice of spiritual inquiry cannot be fixed, organized or institutionalized.

​Zen Master Dae Gak's latest book Upright with Poise and Grace can be purchased at the CZC. 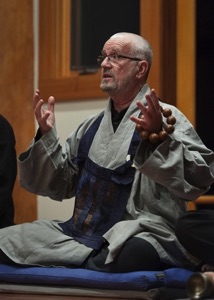 Myo Wol Son-sa has studied with Zen Master Dae Gak since the inception of the Cincinnati Zen Center in 1994. In February 2008 he received Inka from Zen Master Dae Gak and became the Resident Teacher of the CZC and its affiliated centers.

Myo Wol is a married father of three twenty-something boys, and left a career in Human Resources with a Fortune 500 company for a private practice in wellness coaching and digital publishing. And he still hasn't put away his guitar.

His interest is the work of manifesting awakened nature right in the midst of the challenge, heartbreak and unbounded joy of daily life.

"Find your original job and do it impeccably. Never give up. While failure is possible, there is nothing that cannot be transmuted. Our mistakes are our teachers and our alchemy is in our heart’s blood. Our breath is our point of entry to truth. It is with us always, as us, as all of creation. Find the breath in everything."